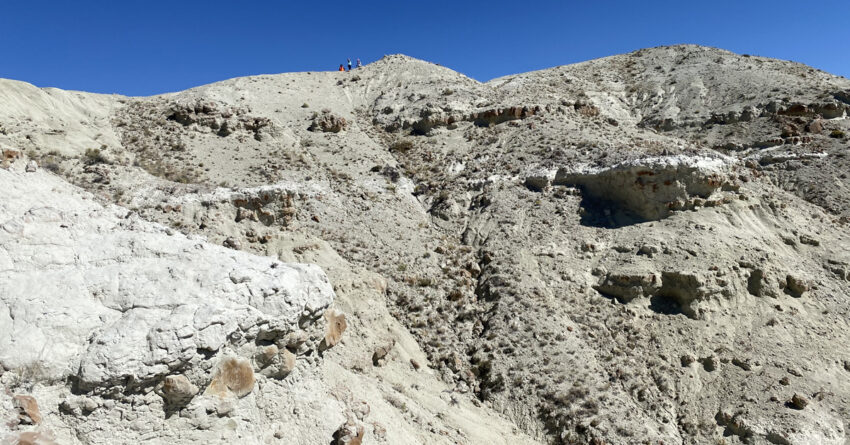 The Flagstaff Rim area in central Wyoming contains a classic geological section of Tertiary continental rocks that, for the most part, range in age from approximately 37 million years to about 35 million years. These strata are then capped by gravels that may be late Tertiary in age (probably younger than 20 million years in age, although there are no age constraints on them). I became interested in this section because the 37-35 million year part of it has strong similarities in terms of age and fossil vertebrate assemblages with Eocene continental rocks at Pipestone Springs, southwestern Montana where I’ve been working.

Much work has already been done at Flagstaff Rim for both fossil vertebrates and Tertiary tuff ages (see Emry 1973; Emry 1992; Emry and Korth 2012; Sahy et al. 2015 for some background). But – a group of us working on continental Tertiary strata in the US Great Plains-Rocky Mountains decided it was time to resample all the tuffs in the Flagstaff Rim section and do 40Ar/39Ar single crystal sanidine age analyses and high-precision U–Pb dating of zircon on these tuffs and several of the section’s detrital beds. Emmett Evanoff, now at the University of Northern Colorado, graciously arranged our field work/camping venue. Bill McIntosh, at the New Mexico Geochronology Lab, and Steve Hasiotis, at the University of Kansas Geology Department, were also a part of our field crew. Bob Emry, Smithsonian Institution emeritus, joined us for a day, and told us about his decades-long work with fossil vertebrates at Flagstaff Rim. We had a very productive field time – and all section tuffs as well as some detrital beds were sampled. A back-breaking, sample-hauling hike at times, but always an amazing place as shown by the numerous photos below.

terrestrial and marine records of environmental change across the Eocene–